A Whale of a Time

Posted on February 4, 2012 by Jonathan Ferrabee

In the course of their lives, whales travel untold thousands of kilometres with a seemingly effortless, fluid motion. The density of water easily supports their enormous body, allowing them a graceful ease within the huge expanse of space that the ocean offers. Their momentous size and weight, already so difficult for us to imagine, is apparently inconsequential in their natural environment.

Alas, moving a scientifically and culturally important whale specimen around in the terrestrial world is in many ways the opposite. It is slow and laborious, and requires specialized methods and tools, as well as many days of careful planning. No one knows this better than the Canadian Museum of Nature! 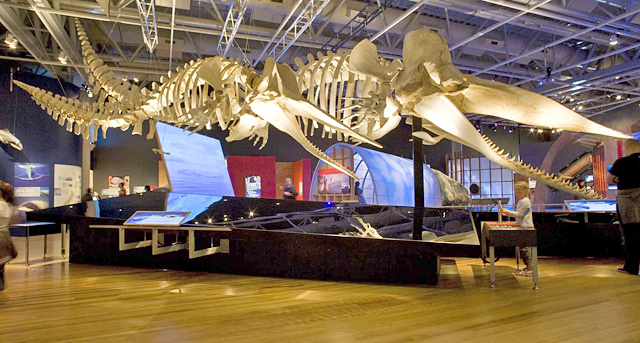 Having just prepared and mounted our own blue whale for our RBC Blue Water Gallery, we are now getting ready to play host to a spectacular exhibition from New Zealand, Whales Tohorā. The exhibition features many whale specimens that Canadians would never normally be able to see. And some of them are really rather, well, large.

Among the rare specimens and irreplaceable cultural artefacts in the exhibition is a pair of sperm whales—a male and female mounted together in a dramatic pose. The male sperm whale’s skull is the largest and heaviest single object in the exhibition. It will require some extraordinary feats before it will be ready for appreciation by our visitors. The skull travels on a trolley built specifically for it. Together, the skull and trolley measure 5.2 metres (17 ft.) in length and weigh 2200 kg (4,850 lb.). 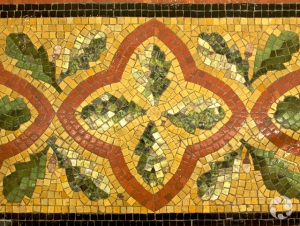 Heritage mosaic on the floor of the museum's atrium will be covered for protection during the hoisting. Image: Martin Lipman © Canadian Museum of Nature

The skull will arrive at the museum in a truck, and that’s when the fun begins. As usual, the museum will close at 5:00 p.m. on Sunday, February 5, 2012. This time, however, there will be teams of people, each with their own technical specialty, ready to pounce as soon as the last visitor has left the building.

One team will set up a 20′ × 30′ tent complete with propane heat at the front door of the old castle. That’s where the skull will brought into the building. There is no point bringing the skull and the three other oversized items to the loading dock, as they cannot fit in the freight elevators.

Another team will assemble custom scaffolding towers, hoisting beams and blocks over the historic stone stairs in the vestibule. Team three will remove the automated double doors and frame between the vestibule and the foyer. All the spaces in the building are sized to humans, not whales!

The museum's atrium. The specimens will be lifted to the fourth floor using a winch. The mosaic floor, including the area of the foyer that depicts a moose, will be given a protective cover for the occasion. Image: Chuck Clark © Chuck Clark

Team four will lay down almost 90 sheets of plywood to protect the magnificent mosaic floor wherever the skull will travel in our atrium. Team five will assemble the specially engineered hoisting platform that has been fabricated off-site for the purposes of hoisting the skull up through the atrium.

All of these teams must have their work done that Sunday evening in preparation for the big day on Monday, February 6. “Hoisting Day” (as we call it) begins early.

Technical staff will start arriving at 6:30 p.m. The truck will pull up at 7:00 p.m. A large telescopic forklift will be waiting outside to take the skull off the truck and put it in the tent. The skull’s trolley features insulation and a protective frame. After all, it’s not just a large object, it’s a key museum specimen and has to be handled with great care and appropriate conservation standards. The tent is in place to protect the skull from whatever winter weather we can expect in the middle of February… It will also be covered by a cloth to protect it further during the entire operation.

From the tent, the skull is moved into the vestibule, where it will be rigged and hoisted over the stairs and landed on the protected atrium floor.

The support beams that have been installed at the atrium's ceiling. Image: Martin Leclerc © Canadian Museum of Nature

While all this is happening, the riggers are preparing for the main hoist up the atrium. If you are a regular visitor to the museum and an astute observer, you will have noticed two large grey “I” beams in the ceiling of the atrium contrasting with the delicate Victorian detailing of the skylights. The beams are attached to the skylight trusses and were put there in early January just for this day.

The riggers for the atrium hoisting will attach two 1.8-tonne (2-tn.) hoisting blocks to the beams and connect them to a sling 30 metres (98 ft.) below. Once everything is in place, the rigging is inspected and approved for use. We’re ready to go! The skull is strapped into the harness, and then it will take 15 to 20 minutes to reach the fourth floor. Not exactly a flying whale.

At the top of the atrium the skull will be rolled onto the mezzanine and through the opening to the gallery. The hoisting will be repeated three more times with other specimens until all the items that cannot fit in the freight elevator are in the gallery.

If only we could go home at this point! Everything has to be put back again before we open the museum to our visitors—doors and railings remounted, scaffolding and tent dismantled, plywood removed, platform disassembled and stored.

Once this is done, we can get on with the installation of the exhibition itself in the gallery, and the atrium will be back to its old self… until September, when we have to take it all out again!

This entry was posted in Exhibitions, Tools of the trade, Whales Tohorā. Bookmark the permalink.

1 Response to A Whale of a Time